The Makgadikgadi Pans National Park stretches away from the banks of the Boteti River, through its hinterland of scrub and grassland. The river and the nutrient-rich western grasslands supply the essential water and sustenance for the herds that inhabit the park. 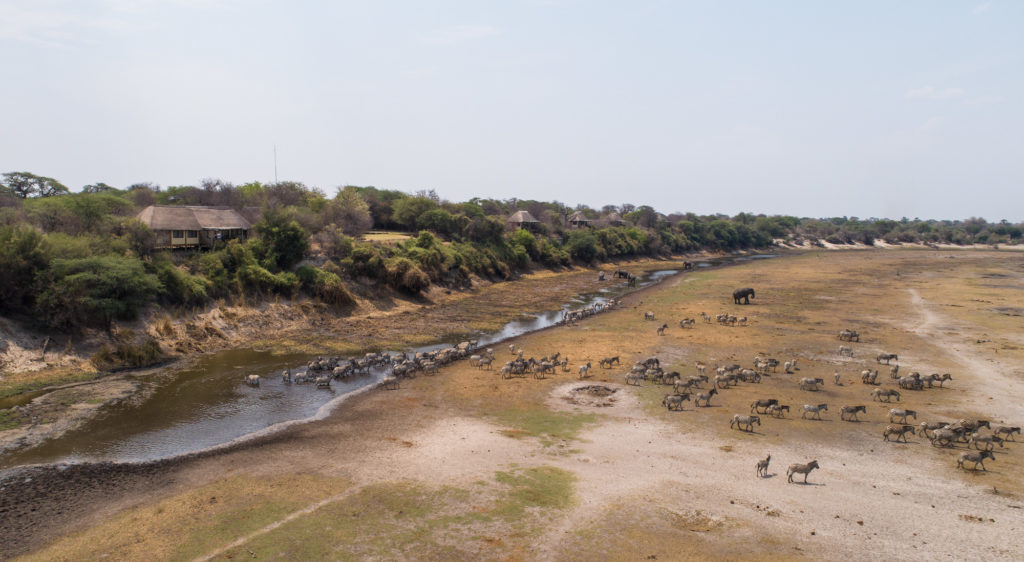 Leroo La Tau is situated on the western bank of the Boteti River, northwest of Khumaga Village and about 140 kilometres southeast of Maun. The eastern bank of the Boteti forms the boundary of the Makgadikgadi Pans National Park, which stretches away from the riverbank towards its interior of scrubland and mineral-rich grasslands.

Leroo La Tau is situated on the western bank of the Boteti River, north-west of Khumaga village, about 140 kilometres south-east of Maun. The river’s eastern bank forms the boundary of the Makgadikgadi Pans National Park.   The Boteti River is the main outflow of the Okavango Delta, collecting the water that flows past Maun, then continuing about 250 km south-eastwards, finally ending at Lake Xau on the extreme south-western edge of the great Makgadikgadi salt pans.

There was permanent water in the river long before Livingstone first explored the area in the late 1840s and brought the existence of Lake Ngami to the attention of the outside world. The river provided water for the great herds of wildlife that seasonally utilised the short-grass plains on the north-western side of the Makgadikgadi, and latterly provided water for the Setswana cattle herders who moved onto the western bank. The river was thus a natural barrier between the wildlife and the cattle – and subsequently a natural boundary for the National Park.  In the mid-1980s the flood waters of the Okavango started diminish as the region entered a cycle of low rainfall in the catchment area – and the Boteti River, receiving far less water, began to recede progressively. It finally started drying up completely in the mid-1990s. The water no longer reached Leroo La Tau by about 1987/88 – leaving a few waterholes in the riverbed fed by underground seeps, and trapping a small pod of Hippo, which stayed in a deep pool near Leroo La Tau, together with Crocodiles that became completely terrestrial and denned in caves in the eastern river bank.   2009 saw the highest floods in the Okavango in the past 25 years, and the Boteti River flowed strongly again, with the water reaching and flowing past Leroo La Tau.

The Zebra and Wildebeest herds migrate in their thousands to the river at the end of winter to access the water. The Makgadikgadi is a harsh, dry environment, suited to Oryx and Kudu, but the river provides a life-giving source of water for the Zebra and Wildebeest utilising the eastern grass plains.   After the start of the rainy season, this desert area teems with wildlife as herds of Zebra and Wildebeest graze to their hearts’ content on the wide-open green grassland plains of the Makgadikgadi. During the wet season there is an influx of migratory bird species, while resident desert species welcome their visitors by showing off their breeding plumage.