Guest writer Mana Meadows goes on a walking safari with Camp Xugana’s head guide Batanani “Slade” Mmegwa and wonders if her Monday mornings will ever be the same again. 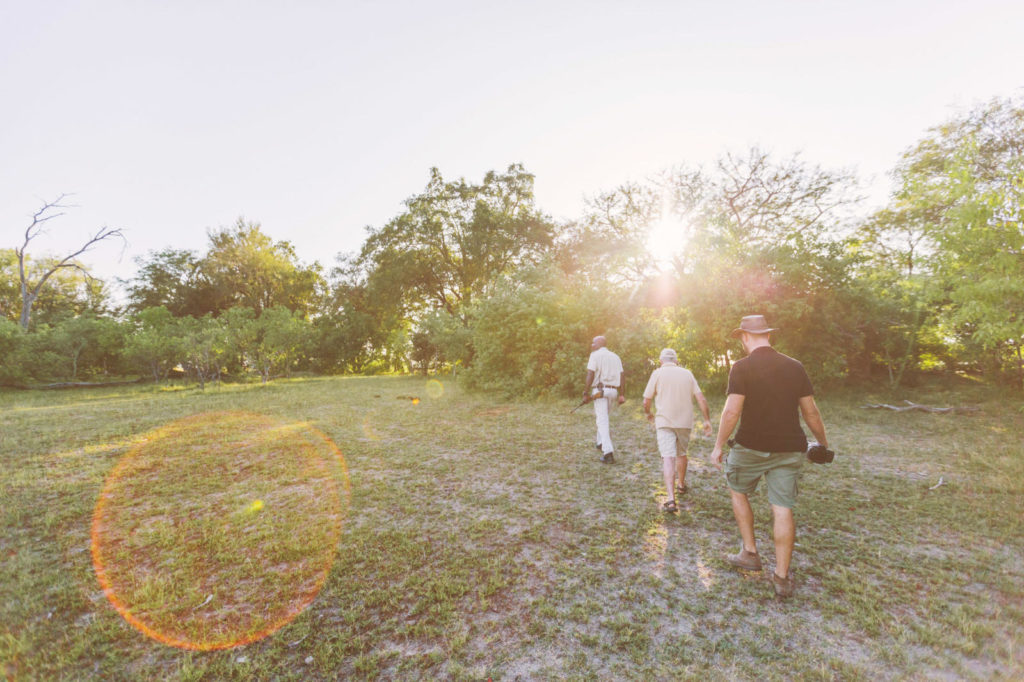 On a guided walking safari with Slade from Xugana Island Lodge

We left the beautiful woodland, dominated by its large fever-berry trees and dense shrubs and Slade led us into open grassland, where soft green “islands” of marula trees broke the seas of golden plains. When the floods arrive these slight ridges will be actual islands. But right now in the dry season the grassland was waterless and peppered with herds of puku and impala who tiptoed their way through the dew-soaked grass. Far in the distance a lone elephant bull made his way towards us, hugging the treeline. It was a dreamlike scene, the experience heightened even more so by the fact that we were seeing it from our own two feet.

I was just lining up a photo of my four companions harmoniously framed by picturesque clump of trees, their binoculars in hand surveying the landscape like modern day explorers, when there was an enthusiastic exclamation from Slade: “Lion!” Followed immediately by: “Wait, two of them!” 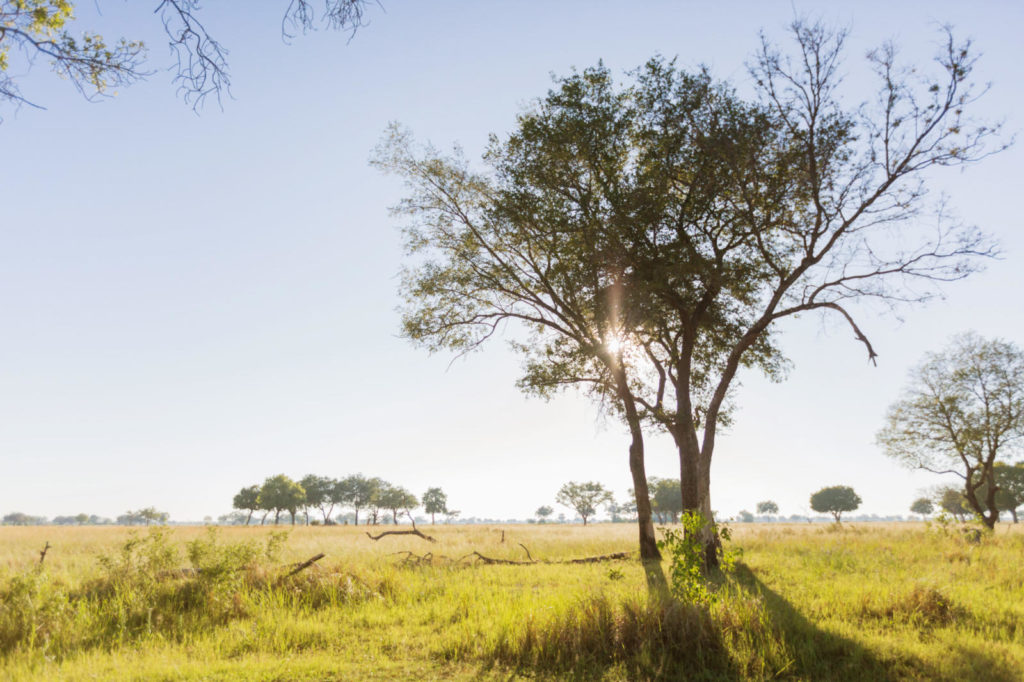 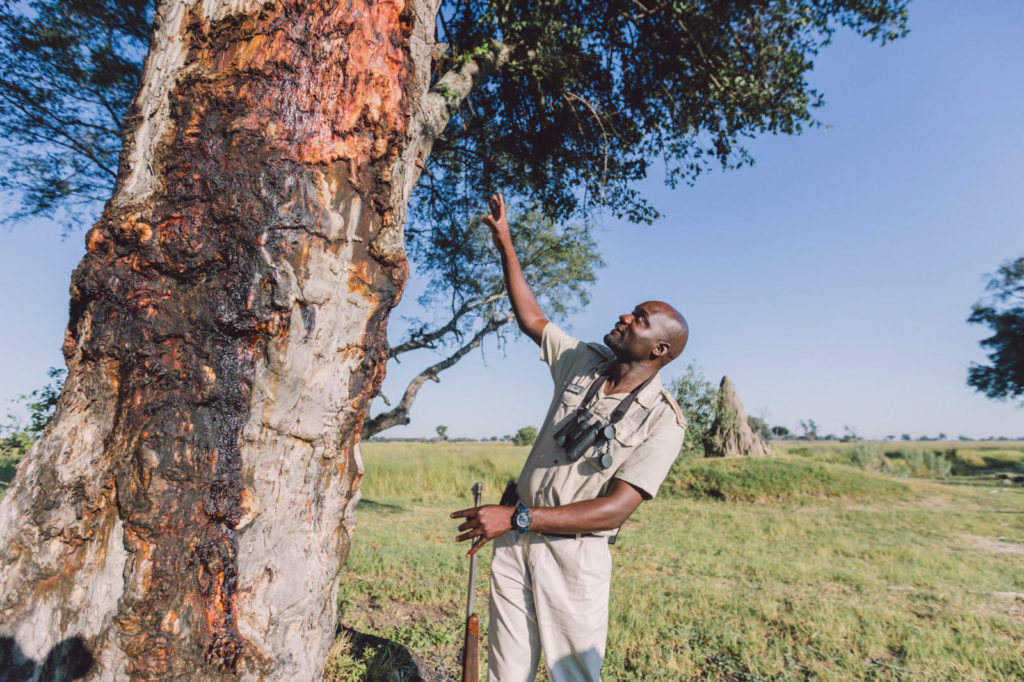 At this stage, lying flat and defenceless on the ground in pursuit of the best angle for my “hero” shot and feeling more than a little vulnerable, I must admit my immediate emotion wasn’t enthusiasm. How close were they?! Scrambling up to take a look at the beasts, I was just in time to see a tawny flank fade into the distant tawny grass. We’d just disturbed their early morning sunbathing session.

“I know where he went,” said Slade. “Let’s go!” I faked my enthusiasm for the second time in less than a minute and tiptoed down the slope behind my eager companions. “This is crazy,” I thought to myself, “we are actually trying to get closer to two meat-eating animals the size of small cows.” Slade told us to stay close but I needed no reminders: sticking to our capable six foot four guide like a shadow. But these two meat-eaters were in no mood for human company and it turns out it is very difficult for humans to get near lions on foot. Centuries of persecution by humans have programmed them to avoid us, and despite searching the area quite thoroughly for both cats, they have hidden low in the grass or buried themselves deep in a thicket beyond our sight.  We watched lechwe raise alarm calls and noticed impala on high alert and although we knew that the cats were within a 200-metre radius of us, today they didn’t want to be seen again. 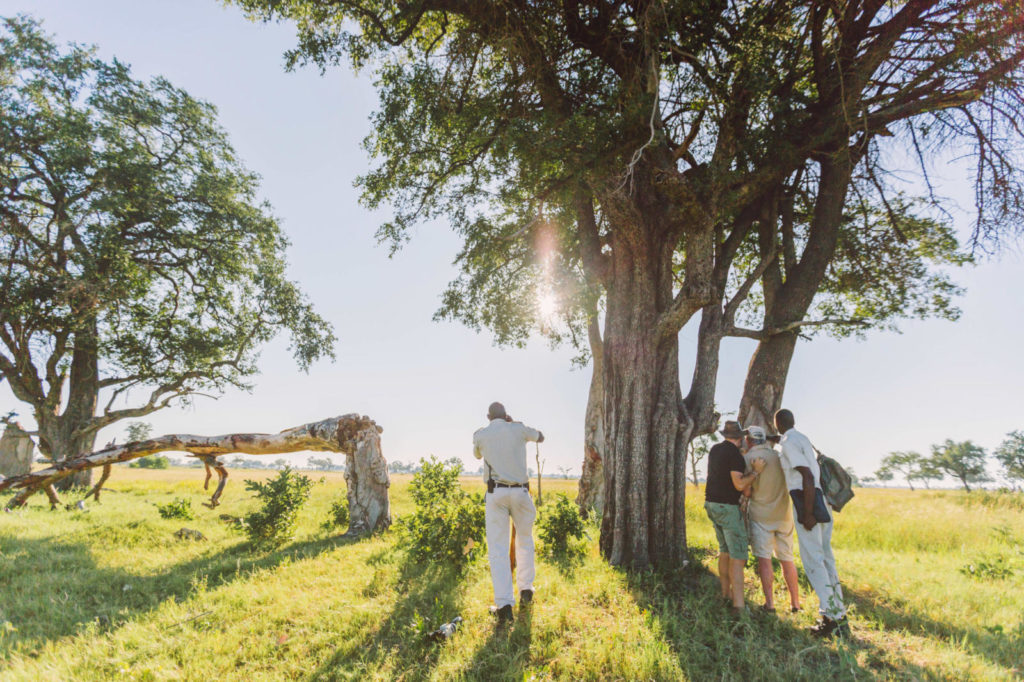 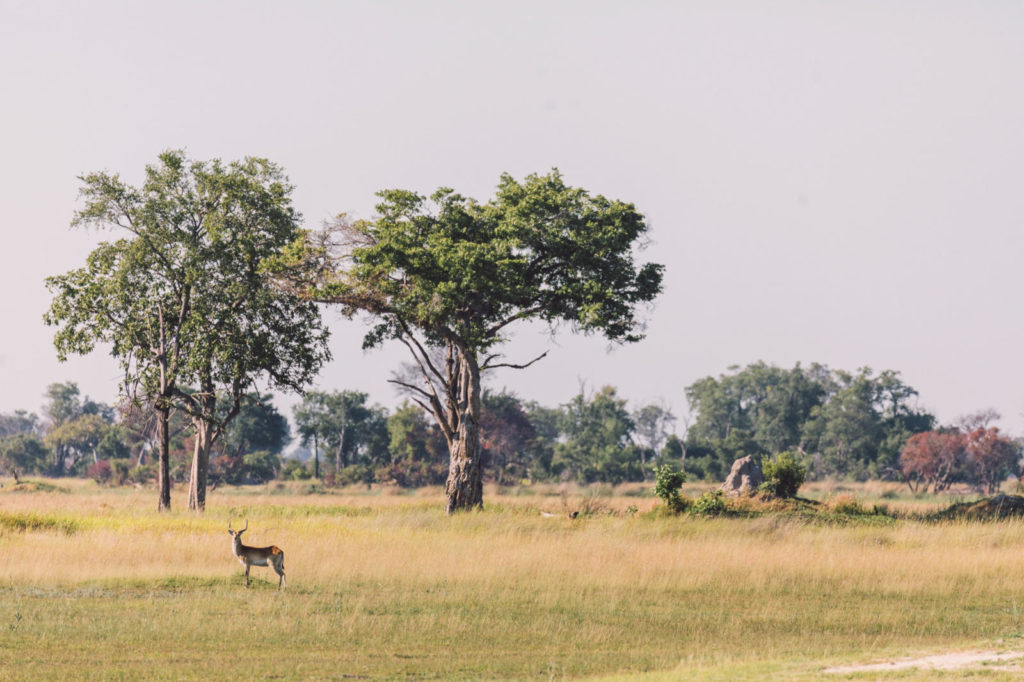 Lechwe rams keep an eye on our movements, there are lion around and all the antelope are nervous

By now my fear had turned to curiosity and it was with many backwards glances that we left the area.  We headed out of the grassland and in to the equally enchanting woodland, still fresh and sparkling in the early morning. Soft sunlight peeped through forest leaves and freshly spun spider webs glistened with the morning dew.

Very fresh elephant and hippo dung lay in our path (both from females – Slade can expertly tell by the way the droppings or urine fell) and again, I was careful not to lag. The heady scent of large herbivores surrounded us for a while along our path. I felt like I was practically tiptoeing, watching every leaf I stood on so that I could better hear Mama Elephant making a sudden move from behind a termite mound, or worse, Madam Hippo returning to the water after her night’s feeding. 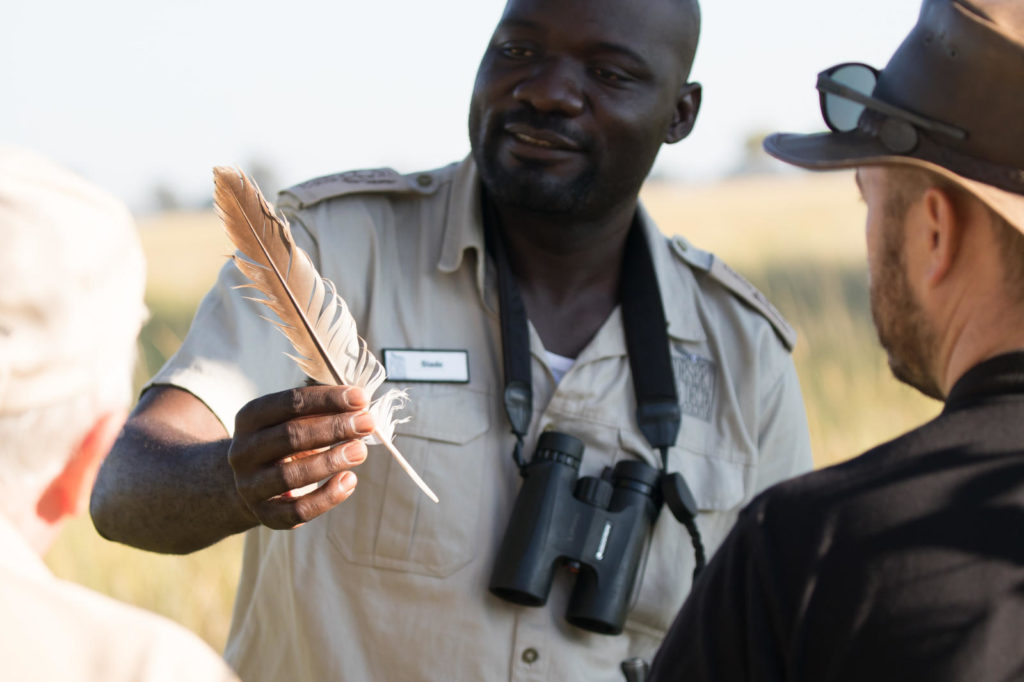 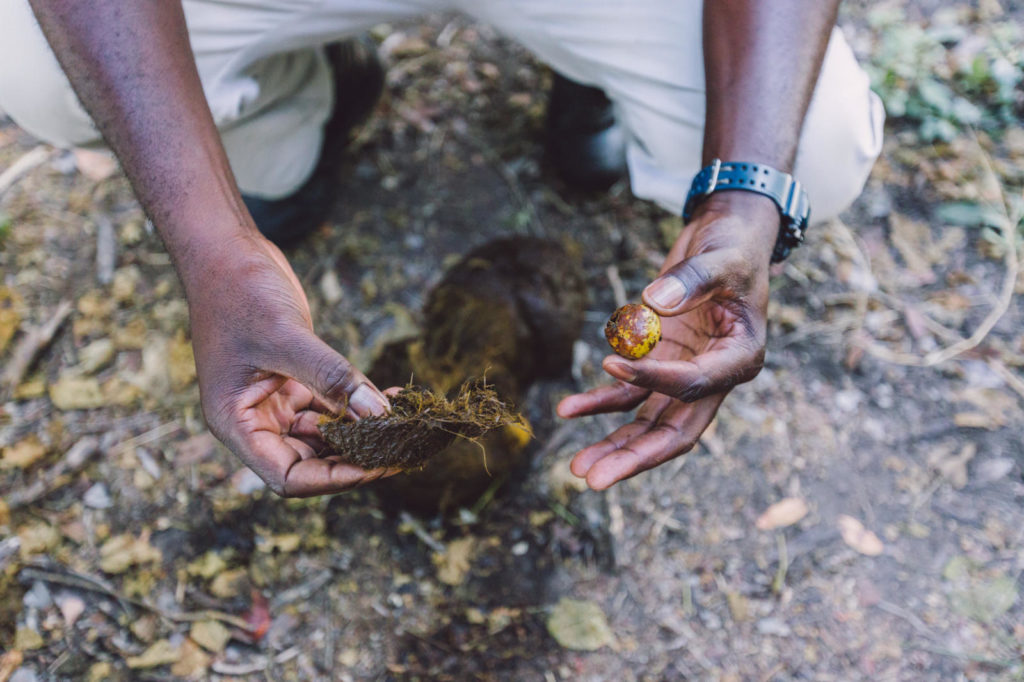 Slade told us that the area we’re in is also known for its large concentrations of buffalo. “You can sometimes see up to 400 – 500 animals here.” He told us that recently he and some guests were on a termite mound, surrounded by one such herd. The animals grazed all around them, peacefully feeding to within meters of them and they had no choice but to sit and be part of it. “To watch and let it happen,” as he said with a smile.  “Standing on the same ground as those big game animals is something that our guests like most.”

I could see what he meant. Although the quiet softness of the forest walk had truly won my heart, on the way to the forest we had walked over the area where we’d seen the first male lion. It was intoxicating in a way. Right here, I thought, some ten minutes ago, a large cat the size of a small cow was soaking up his morning sun – and he’s probably watching us now.

Roots in the delta, heart in Boteti On the move with Ernest