The Bandit Boys of Moremi

Botswana’s very own – Ghost and the darkness

You may have watched or at least heard about the gripping story and movie of two man-eating lions in Kenya’s Tsavo region in 1898. Well, the two lions in the story to follow are certainly not famous for the same reasons but our Marketing Manager, Andrew, has nicknamed them after the movie title as a result of a few ‘bone-chilling’ experiences with these two males in the Xakanaxa region of the Moremi Game Reserve. Andrew explains below.

I remember watching a young male lion lounging around near the crossing at Paradise pools one afternoon in March 2019. Gwist, our guide from Camp Moremi, had a cheeky smile on his face and told me of this young male’s 2 brothers who he was roaming around with. The three of them came into the region 4 or 5 days earlier. Gwist admitted he was surprised the ‘big boys’ hadn’t found them yet. Big boys? “Yes! There are two new big males in the area, causing lots of trouble. 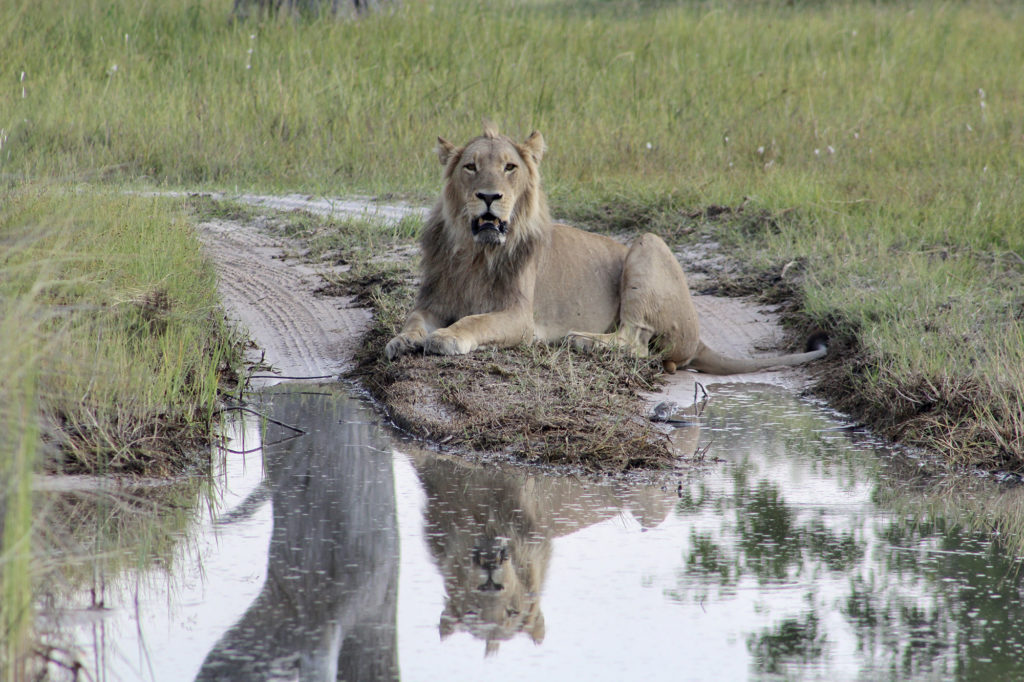 The next morning, we were off early as there had been news of a big fight between 2 big male lions and 3 young males. We rushed over to Jessie’s Pools to find the 2 big males approaching the water from the West. Noses up, sniffing the air – they were clearly looking for something, or someone… The radio was a chatter of the evening’s events. “It seems these two big boys found those young males and beat them up badly. 2 of the youngsters fled quickly and escaped the area, but one did not manage to get away and is hiding somewhere” Gwist translated for us. The big males walked over to the water and had a drink, never ceasing to scan the tree line and sniff the air. “Then suddenly, as if perfectly scripted, they started walking toward our vehicle and Gwist quickly drew all of our attention to a very scared looking young male hiding in the bushes just metres away from us. He was up and running in a flash as the big males slowly approached. Before I knew it, I’d lost sight of them. We looked around frantically before I saw the slightest movement in a patch of long grass. Every hair on my body stood up at the same time. I managed to identify a vague outline of the two beasts moving through the grass to where the young male had been hiding. Soon it turned into a full-on hunt – they split up and were moving in quickly on his scent. We were perfectly positioned to catch a chilling moment as the young male ran past our vehicle, looking in as if to ask for help, only to be followed shortly by his worst nightmare. They disappeared into the bushes and Gwist pulled over. He spoke of the circle of life and the dominance of lions. Before he had even finished his sentence, the radio was alive again with shouts of “He got away! He swam across the water and ran!” From that day on – I started calling these brothers Ghost & the darkness.

I’ve seen them several times since and each encounter reminds me why they deserve the names.

The Moremi Game Reserve is situated in the eastern part of the Okavango Delta, on the south-western border of the Chobe National Park, and covers almost one-third of the Delta. The region offers exceptional game viewing and is one of Botswana’s top travel destinations. Both Camp Moremi and Camp Xakanaxa offer exceptional safaris in the Moremi Game Reserve.