Our latest guest blog feature is by Walter Smith who visited Camp Xakanaxa where he and his family enjoyed the sighting of a lifetime involving a lioness, her cub and a pack of wild dogs.

This past weekend I had the opportunity to visit the Moremi Game Reserve with my family and we enjoyed our stay at Camp Xakanaxa immensely.

We took a drive to Paradise Pools as we had been told by the guides that they had seen a lioness with her cub in that area. We arrived there shortly after she had crossed a pool of water with her cub and in the process had caught and eaten a yellow billed duck. As we arrived there the mother and cub had taken rest up on an anthill and were drying themselves off in the late afternoon sun.

Paradise Pools is one of my favorite areas in the Moremi Game Reserve. Surrounded by rich riparian forest, there is a large open area with many dead trees which silhouette the skyline and add to the dramatic landscape. With the short grass, open space and availability of water, antelope like letchwe and impala like to congregate there as well.

This is paradise. The late golden afternoon sun not only adding to the atmosphere and serenity of the moment, but also being enjoyed by these two lions to dry themselves and add a bit of warmth as the evening was approaching. 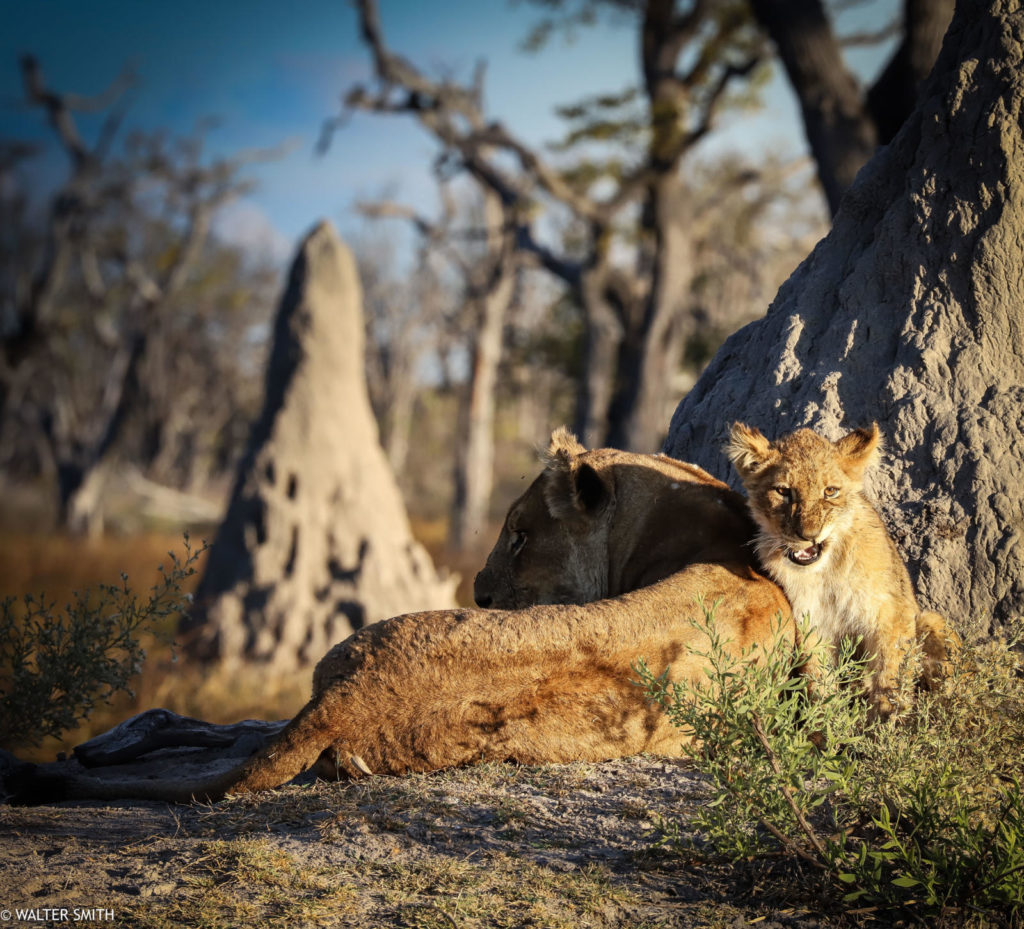 We parked up about thirty meters from the anthill and were watching the mother and cub grooming themselves in the late afternoon sun, when out of nowhere a herd of impala scattered through the tree line about 400 meters away from us and at speed, came running across the open area. The impala were in short pursuit by some wild dogs. It was as if instant chaos had broken out into what was a serene and peaceful setting. One young female impala darted around an open pool and ran towards the back of our vehicle in the direction of the anthill where the two lions were resting. The lioness was immediately alert and, in a flash, pounced at the opportunity to catch the impala. The impala dodged back and ran directly towards us swerving at the last minute to avoid our vehicle. In a flash, with moist dirt spraying up in my face, I was within a meter of this lioness braking her charge to avoid running into the door of the vehicle. I recall the flash image of her claws, fully extended as it ripped up the damp earth and I looked straight into her eyes as she realised the vehicle parked there. This was incredible, she must have crossed a span of twenty-five meters in a split second. Needless to say, the immediate rush of adrenalin through my body right there and then was hugely exciting. We looked at each other for a second or two – it felt like eternity and the hair rising on the back of my neck was a sure indicator for me at the realisation of the immensity of this incredible predator’s deep natural instinct to hunt and kill.

She rounded the front of our vehicle, at this stage with the cub at her side and as she walked out into the open beyond the vehicle, we could hear the alarm barks and yelping of a dog. It started with one dog, and then another and another, and as we turned to look in the direction of the barks, it was evident that this was a formidable pack of dogs. There were twenty-two dogs in the pack and they did not like the fact that there was a lioness within their hunting area for that afternoon.

Completely exposed now and crossing a large open area in an attempt to get her cub to the safety of a fever berry tree cluster, it was clear that this was not going to be an encounter which would just fizzle out without these two predator species properly greeting each other. With her cub hugging her flank, she arched her back, her chin pushed down on her chest, and her ears turned backwards as she listened intently to the barrage of war-cry yelps and barks from the advancing pack of dogs.  Getting her young one to a place of safety was intensely evident. We held our breath as the pack of dogs organized themselves on the advance towards these two lions. What was the serene and peaceful atmosphere of beautiful Paradise Pools area had, within a minute, turned into an energy radiating battle ground. The eternal battle of these predators, something which I believe is genetic in all of them, unfolded without build-up or ceremony. They were right into it. 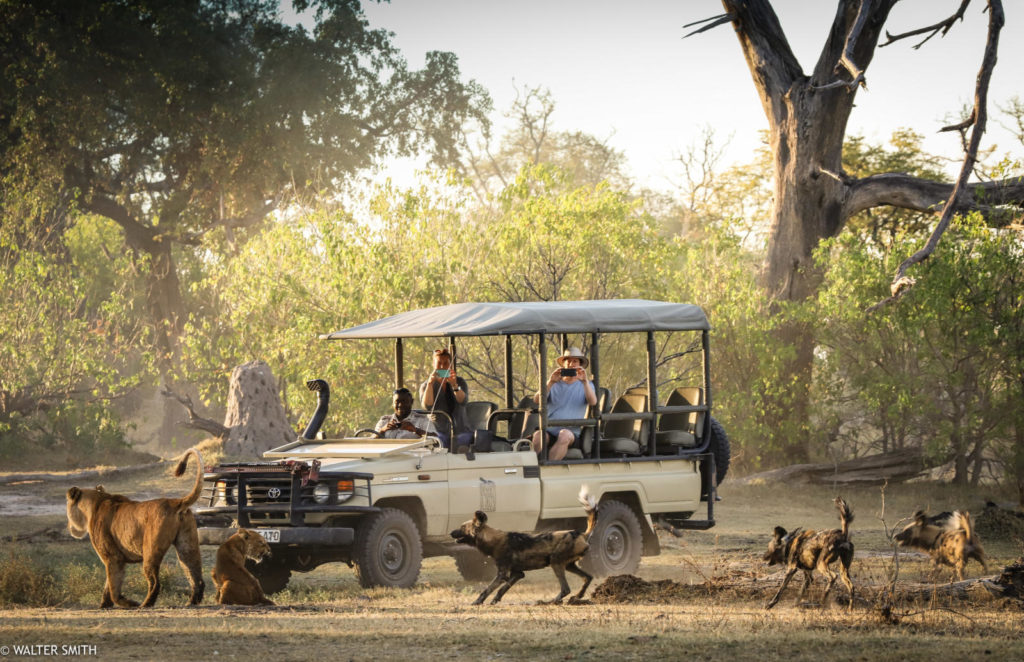 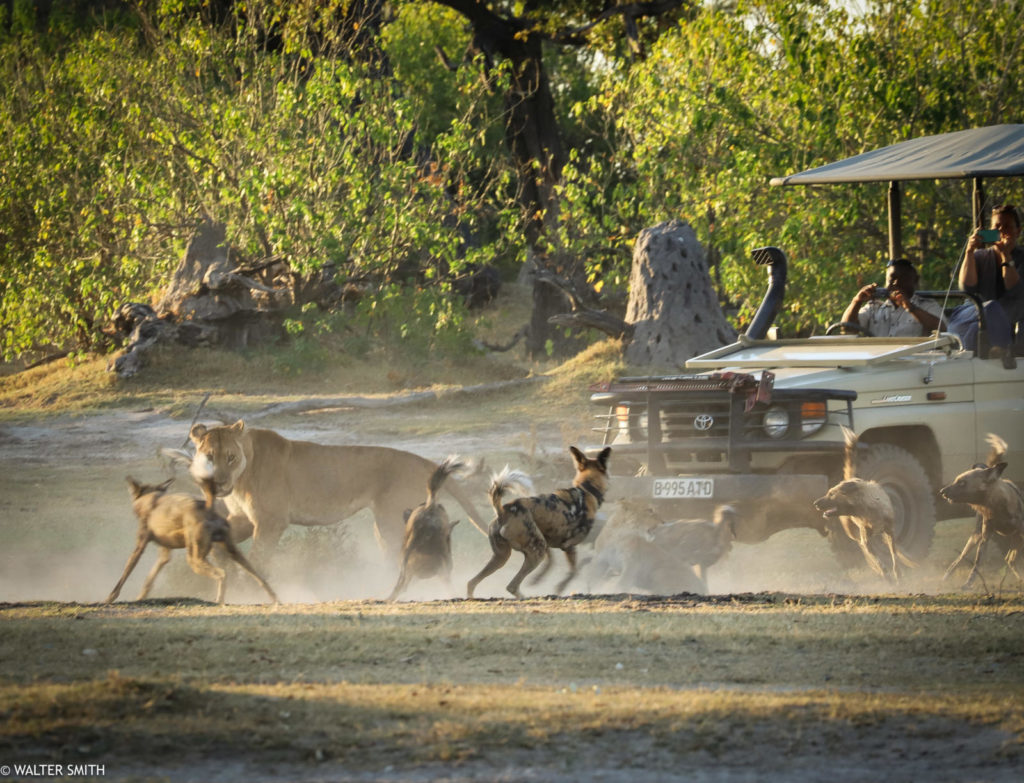 Wild dogs are highly organized pack hunters, they have a very close bond between individuals within the pack. Whether they are on the hunt, or as in this case, at war, the one appears to be intensely aware of what the next one is doing. Together they dance within their organization as if it were an ancient form of art.

The dogs, now arranging their attack, started approaching the lioness. The young cub at this stage confused and letting out small growls as the army of dogs barking and yelping became evidently louder. I was convinced that this would be the last that we would see of this cub as it was a sitting target. I knew that it would not take much to distract the lioness and within seconds the cub could or would be ripped to shreds by the gnashing teeth of the chaotic wild dog advance.

One dog took a gap and sunk its teeth into the hind leg of the now growling and distressed lioness. But this old campaigner  was not going to have any of it! She would not allow the nips and bites of the advancing dogs to go with tolerance. In a burst of dust, she pounced the dog. The dog was a young female and took the brunt of a swipe from the lioness’s large front pore on its right-hand flank. Claws extended, this cut into the side of the dog and pinned it down in a split second, the lioness managed to sink her teeth into the back of the dogs neck, just behind its ear.

This would have been the perfect time for the other dogs to have mauled the cub, but in defense of their pack member, they flashed right past it and commenced their attack on the lioness. Dust bellowing in the air and the incredible sounds of the lioness growls and dog yelps, the battle was in full rage. Dogs darted in from all angles, it was one lioness against twenty-two dogs and they were not there for diplomatic discussions. One from the left, one from the right, one from the front, one from the back, repeating itself time and again. She spun around in circles, growling loudly and doing her best to defend the darting attacks of the energetic pack of dogs. The growls from the lioness combined with the barks and yelps of the dogs, in the bellows of dust was a sight and sound that not many have experienced before.

The wild dogs would dart in, almost as if in rehearsed sequence, from all angles, take a bite at the rump, leg, flank of the lioness, and as quickly as they attacked, would retreat and reorganize themselves for the next barrage of attacks. I was in awe of the constant attack and certainly, it was very clear that this lioness was not going to go down without a complete and defiant battle to the end. 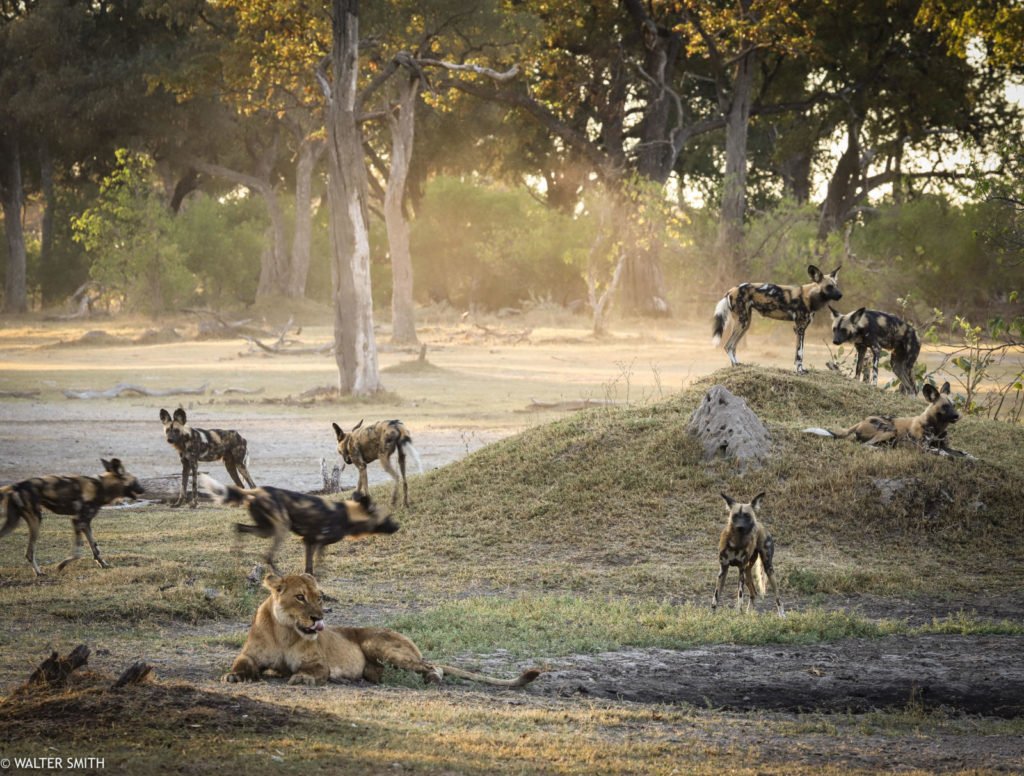 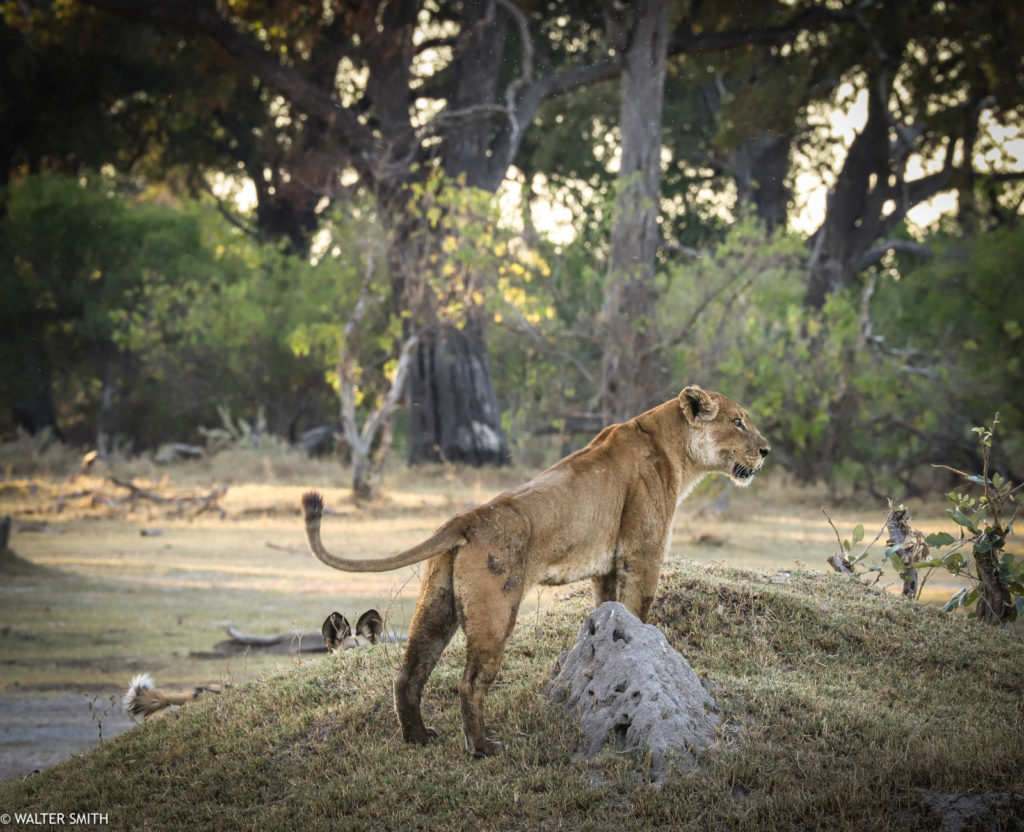 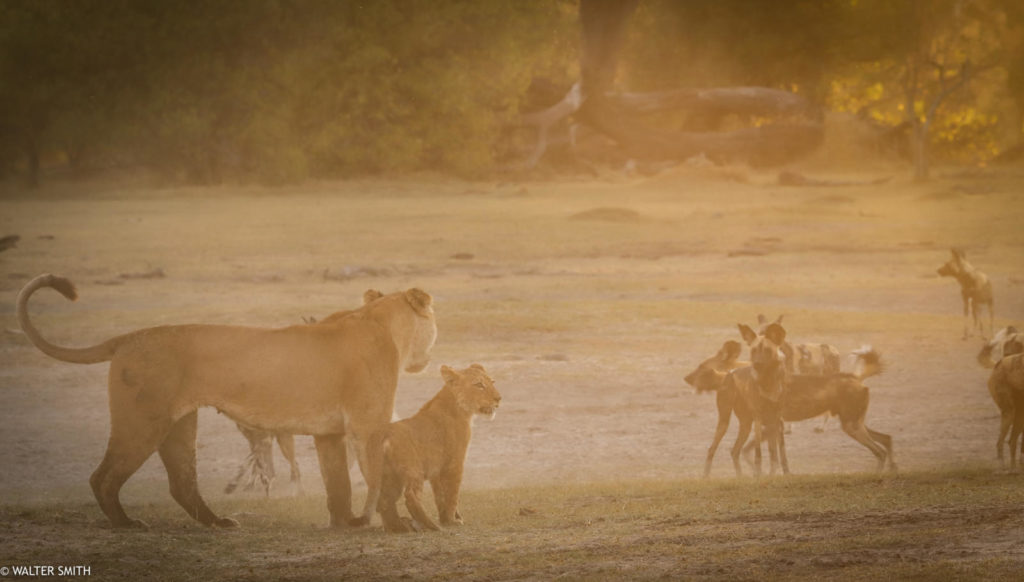 Almost as quickly as this fight was triggered, it dissipated. The growls become less and the dancing organisation and advances of the dogs slowed down. As the dust cleared, the lioness sat down and the dogs, one or two of them letting out the occasional bark, slowly surrounding her, started opening up their tight war circle of advance, and retreated. For a few minutes, it appeared that they were taking a rest, the circle of dogs fanned out and there silence once again set in. It appeared that this battle was nearing its end.

The serenity of Paradise Pools set in once more! The scene with this lioness lying down to rest, with some of the dogs also taking a break, with the beautiful backdrop of this incredible landscape was mesmerizing.

After a short rest, the lioness got to her feet and climbed to the top of a nearby anthill. She started letting out a soft but gentle bellow as she called for her cub. The cub had scurried to safety of the bushes as soon as the dogs triggered their attack, but she had not seen it depart. She called out a few times urging it to answer or approach her.

A rustle in the thicket to her right eluded to its response and the cub quickly scurried out to where she was standing. The dogs, still maintaining a close eye on its mother, did not flinch as the young one ran out to her. We sat and watched them, normality returning to what was a fierce battleground mere minutes ago. The two lions walked off towards the thicket.

The sun now hugging the western horizon, provided the most incredible light through the trees and combined with the dust in the air from the recent skirmish, set the perfect scene as the last of the dogs observed the lions moving off. Reunited, and the dogs having moved off, the lioness and cub reassured each other in a display of greetings and gentle growls.

With the action completed and the afternoon taking its rest, we started heading back to Camp Xakanaxa. This had to be one of the most intense and action packed wildlife experiences I have ever encountered. I was thinking to myself what could be better. As we drove off the open area towards the tree line, I saw it – perched upon a branch, obviously observing the chaos of the past afternoon from its elevation, sat a leopard. 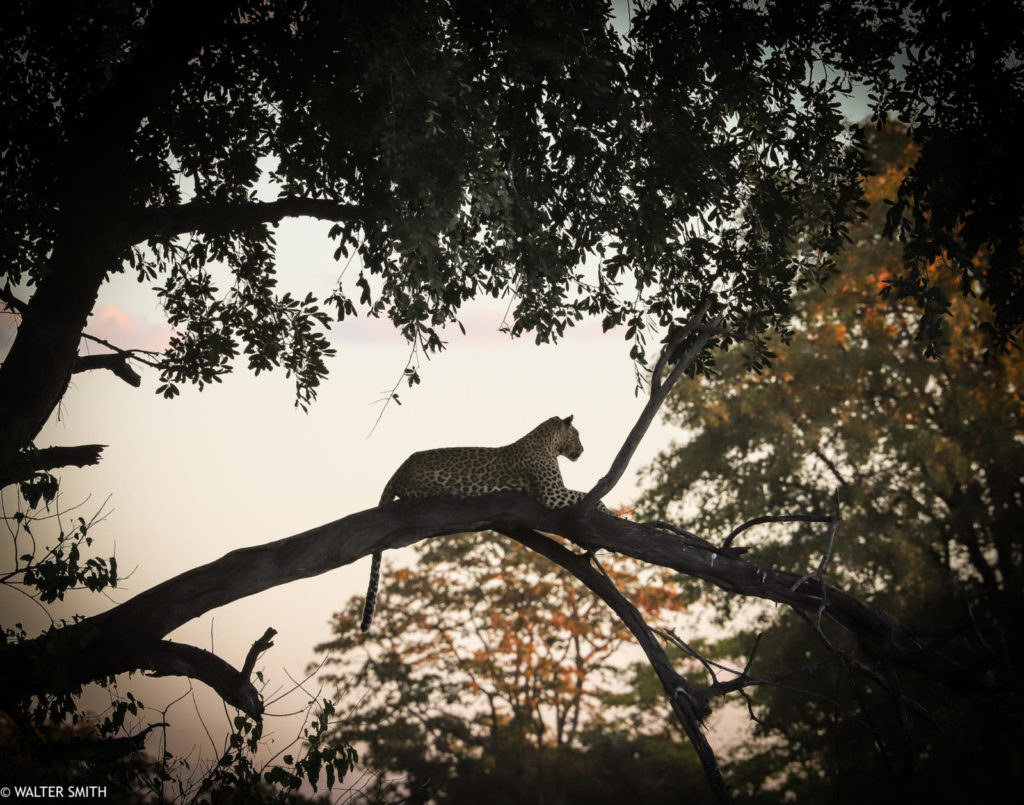 Thank you to Walter for sharing your photos and stories of this exceptional wildlife encounter. The Moremi Game Reserve is renowned its prolific wildlife and this is an excellent example of what the region has to offer.

CELEBRATING WE ARE AFRICA AWARDS ONE MONTH ON